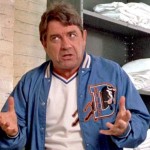 Jena had a last minute conflict so we were forced to enlist an emergency stunt Jena.  Fortunately, Tim’s wife Pat was available.  We had to make an alteration in movie (Pat has seen Man on Wire) so we pulled out The Dirty Dozen! This classic example of a mission movie involves a great cast trying to save the world from the Nazis.  Because that’s what heroes do.  They save the world from the Nazis.

Our next movie will, we promise, be Man on Wire!