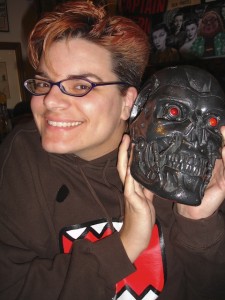 On some days, Melissa is a special effect from Stan Winston Studios.

Melissa’s first film was A Mouse and His Child, which she remembers seeing in the theater at the age of 2. She remembers her second movie, too (Dumbo). She also remembers her next seven theater trips after that (Star Wars on its original release). By then, the glow of the cinema had captured her for life.

35 years later, Melissa is now a Minneapolis-based multimedia artist, currently specializing in photography, video, graphic design, podcasting, and producing improvisational theater. She somehow manages to do this while also watching an obscene amount of movies from every country and every era.

Furthermore, Melissa is the curator of The Sound and the Foley, a project dedicated to the research of memetic sound effects and musical themes.

Melissa is also Queen of the Lizard People.

You can learn more about Melissa and her projects at Tin Lizard Productions. You can email Melissa at melissa@reeledu.com