The first movie Tim remembers seeing in the theatre is The Wizard of Oz.  No, he’s 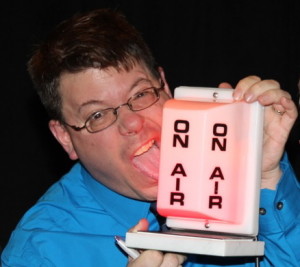 not that old. It was a revival.  Since then, he’s watched thousands of movies once and hundreds of movies many more times than that.  Like all good film fans, one of his favorite pastimes is forcing his favorites on others.

He is currently in the midst of an insane project called The Alphabetical Movie Project wherein he is watching all of the movies he owns in alphabetical order.  He started in 2009.

Tim blogs about movies, politics and other stuff at petsnakereggie.com.

He’s also the co-host of the Geeks Without God podcast and Artistic Director of Fearless Comedy Productions.

His favorite movie is Raiders of the Lost Ark. He was extremely unhappy to learn that Jena had already seen the film.

You can email Tim at tim@reeledu.com