Episode 6 – The 7th Voyage of Sinbad 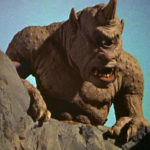 Yes, we know that we really should have waited for The 7th Voyage of Sinbad until episode 7 but it didn’t happen that way.  Get over it.  We recorded this episode approximately one week after special effects Genius Ray Harryhausen passed away.  Jena, as usual, had absolutely no knowledge of the film or of Harryhausen.  This was a problem Tim and Melissa gleefully solved.  As a bonus, both Tim and Melissa have stories about actually meeting Ray Harryhausen!  Envy us!