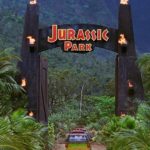 This week is unusual because Melissa couldn’t make it and Tim was forced to be the movie expert. This proved difficult as it was only his second time watching the film! He and guest Kelvin Hatle do their best as they watch a favorite of many people who were children in the 80’s – The Goonies! Produced by Steven Spielberg, this film feels incredibly dated if you weren’t into it in the first place. Still, it holds a place of affection in the hearts of many so we take a look at what makes it tick.

Next up is…we don’t know! Whatever movie wins the Academy Award for Best Picture.