It was the end of CONvergence 2012. Tim, Melissa, and Jena were sitting around at CoF2E2, nerding out about various things, and someone referenced a movie (probably Melissa). Jena didn’t get the reference. No one was surprised.

Jena’s lack of ability to communicate in anything movie was discussed, and the idea of a movie podcast kicked around. It wasn’t the first time Tim and Jena had discussed this possibility. But, no really. This time, they were going to make this happen.

They then promptly put the whole thing on a shelf for 6 months while Tim and Jena launched a theater company. Lazy-asses.

Once the company launched, the two started rumblings of doing the podcast again. It’s surprisingly hard to schedule sitting on your ass for a few hours. The group recorded a few episodes, and then started web development.

That also took a couple months. But eventually, piece by piece, it all came together. Design elements were put in place, colors picked out, logo added. They installed the podcasting software and tested the settings. And then, it was finally ready.

You can email all three hosts at info@reeledu.com 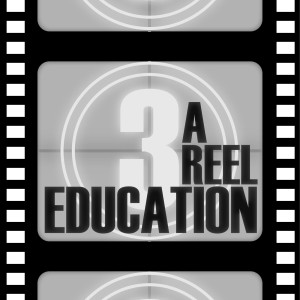 Melissa’s first film was A Mouse and His Child, which she remembers seeing in the theater at the age of 2. She remembers her second movie, too (Dumbo). She also remembers her next seven theater trips after that (Star Wars on its original release). By then, the glow of the cinema had captured her for …

The first movie Tim remembers seeing in the theatre is The Wizard of Oz.  No, he’s not that old. It was a revival.  Since then, he’s watched thousands of movies once and hundreds of movies many more times than that.  Like all good film fans, one of his favorite pastimes is forcing his favorites on others. …