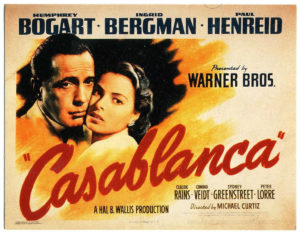 Welcome to the inaugural episode of our podcast! This podcast will follow our attempts to  educate Jena Young on the great films that she hasn’t seen yet. Or, occasionally, just the ones she doesn’t remember.  This week’s episode was recorded before co-host Melissa Kaercher became a co-host so Tim Wick educates Jena all on his own.  If you didn’t suss it out from the title, we start with one of Tim’s favorite films – Casablanca.  To open the podcast, Jena tells us everything she knows about the movie she is about to see.  Then we take a break to watch the movie. If you really feel like playing along, you can watch it too!  Then we come back and discuss the movie.  We hope you enjoy our first podcast and keep coming back for more!