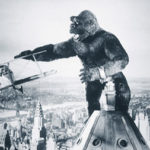 We remain in the jungle for a third straight episode as we watch King Kong!  We begin in an actual jungle and then transition to a concrete one!  Given the time period, we are treated to more racism and sexism but also a monster movie that will, from that point on, be the movie against which all other giant monster movies will be measured.  Including the remakes of this film.  You owe it to yourself to start with the original.  We make sure to provide constant musical tribute to special effects wizard Willis O’Brien.