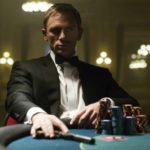 Our Bond cycle is now complete as we watch the first outing for Daniel Craig.  Casino Royale was the first re-boot of the Bond franchise although it held over Dame Judi Dench as M. Craig takes over James Bond and pulls the franchise in a direction that helps us understand a little bit about why Bond is the way we all expect him to be.  Chrys VanDerKamp joins us one last time to see if Mr. Craig can rock the suit and the Walther PPK as well as the actors who have come before him.  Spoiler alert: There is no skiing.

Next up, we follow Daniel Craig to Layer Cake!