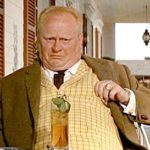 Our Bond project officially begins!  Over the next several episodes, we will be watching Bond movies featuring each of the actors who have played this film icon as well as other movies featuring the same actor!  We begin with what many consider the best of the Bond films, Goldfinger!  Our companion for this film was Chrys VanDerKamp, who has limited Bond knowledge and leaves our Educational podcast anxious to learn more about the film series.  Don’t worry – we gave her a list.

Up next, we will watch another of Sean Connery’s best performances when we see The Untouchables!