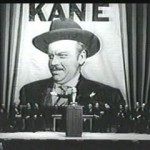 We’ve finally arrived at “the greatest movie ever made” – Citizen Kane!  We tackle Orson Welles’ groundbreaking film as well as it’s reputation.  We encounter a stable of great actors and talk about Welles’ career.  Is this film the greatest move ever?  That is certainly a matter of taste.  We spend a lot of time talking about the film’s legacy and that may be more important than the film itself.

We also say the next movie we watch will be “Man on Wire.”  Turns out we were wrong.  It will be “The Dirty Dozen.”